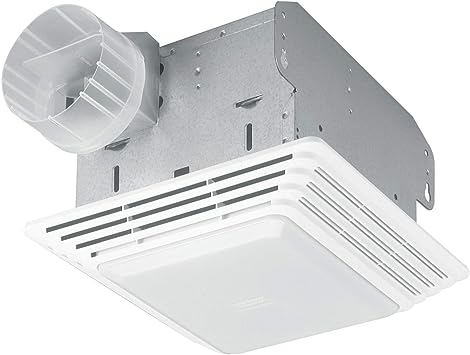 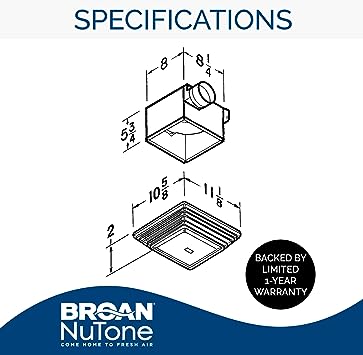 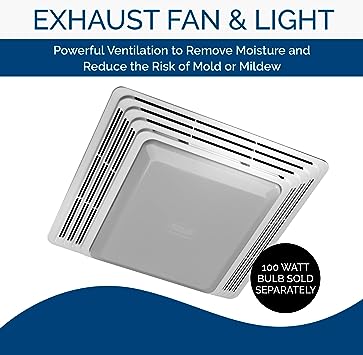 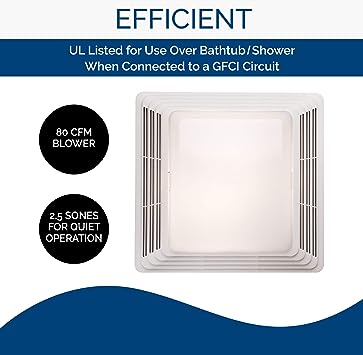 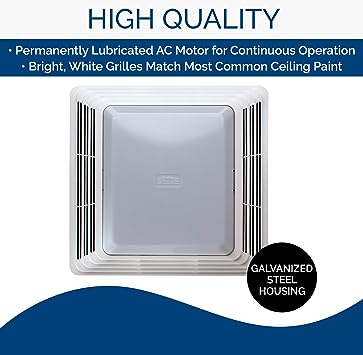 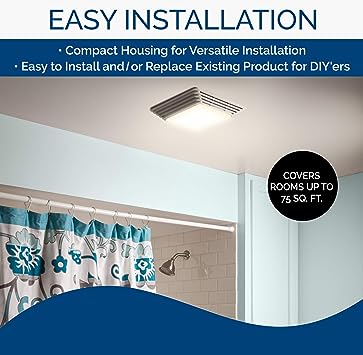 Make sure your home is comfortable and has proper ventilation with the Broan Heavy-Duty Ventilation Fan and Light Combo. This innovative ceiling-mount unit removes odors and eliminates moisture to improve the air quality in your home. The white grille blends in with your ceiling to provide a cohesive look to your existing decor. It's designed with sturdy key-holed mounting brackets and tapered, polymeric duct fitting with a backdraft damper to provide easy installation and duct connection. The high-quality fan uses a 100-Watt incandescent light bulb (sold separately) and operates at 2.5 Sones with an 80 CFM to be efficient and quiet. Use over the shower or bathtub with a GFCI circuit. Upgrade your home today with the Broan Heavy-Duty Ventilation Fan and Light Combo.

These products are named Heavy Duty for good reason. They're built tough to last in those punishing applications that are just too much for typical residential products. And a broad spectrum of AMCA and HVI certified performance ratings means there's an HD Series Fan or Fan/Light that's just right for your next light-commercial or institutional application. Restaurants. Office buildings. Care facilities. Convenience stores. Bars. Gas Stations. Anywhere you need rugged, reliable performance.


Replacement of old fan was way easier than I first thought...

I bought this to replace a (50 cfm) 20 year old version of the same fan. At first glance, and after reading the installation instructions, I thought I was in for a major afternoon project that would involve climbing up in the attic and replacing the box in the ceiling, rewiring, etc. Whoa! But then I took a closer look on the new fan and noticed that the blower motor / bracket, just clips into the housing around it. I pried it loose, and it pops out. Went to my old fan.. again, basically a 20 year old version of the same, and noticed that it mounted the same way. So installation turned out to be as simple as unplugging and prying loose the old motor/bracket, and popping the new one in. They don't tell you that in the installation instructions! So if you're simply replacing an old worn out model of the same Broan, then the replacement is about as simple as it could be.

Have had this now for six months and it works great. I had a lesser capable exhaust fan for years and I would have to wipe the ceilings down every so often to avoid mold spots from forming. This fan has totally relieved me from having to do that. The moisture from hot steaming showers is removed by this fan. I also wanted a fan that would muffle bathroom noises but not be loud either and this fan does that also. As a bonus, I put a 100 watt Equivalent LED light bulb in this fan and it has really brightened up the bathroom. I am so glad I spent the extra few bucks for this fan!!


It's not as super quiet as the whisper ones

Fairly quiet. It's not as super quiet as the whisper ones, but it's more powerful and also rated for continuous usage. Which is a good thing. Easy to replace the old one out.


The price is right; does a good job

Your browser does not support HTML5 video.  I had the fan installed by handymen during reno and they had no trouble at all. There was no attick space above. The fan does the job very well- I can see the fog lifting/clearing during and after showers. Although it is not as quiet as other fans (that are more expensive), the price was right and during showers you cant hear the fan much anyways. Very happy with my purchase.


Works great and not to much noise.

We needed a new fan for a long time in our restroom because the one we had was beyond noisy. There were times we didnt turn it on. This one is so much better, it is not slient but the noise level is way way better. Easy install, just know that there are pair of wires for the fan and light that you have to tie together depending the the swtich you are using.

I purchased this product while it was on sale for 1/2 price. I actually purchased two for both bathrooms in my home. Installation was no small project. There was no existing master bath exhaust fan so I had to run cable, install a switch, add additional framing, run ducting to roof eves with duct cover, repair drywall and repaint. You'll need to have access to the crawl space or there will be considerable drywall removal and repair. It was a major job.The main bathroom already had a fan but the orientation of such required me to add additional framing to use the existing ducting to the roof. I spent about 8 hours in the crawl space to install both. I was sore the next day.Now the fan operates great. We recently repainted the bathroom and I didn't want any water is damage to the paint. Without a fan the room would get so humid that there were water lines in the paint. So this little guy was a big improvement to our home. Shower is well lit and the humidity is gone.This fan was on sale for such a good price it was a blessing, two for the price of one Product works great, looks good, and my wife and children like them.

4 stars because housing was damaged (slightly crushed). I was able to straighten the sheet metal and used a small screw the repair a tac weld that broke. Otherwise fan is very quiet with great airflow, looks great, as pictured. If replacing an exsisting fan, I think it’s possible to install without attic access.

Love this fan. Very quite but can still exhaust lids of air. I turn it on before i get in the shower and when i get out there isn't any steam. Works wonderfully. 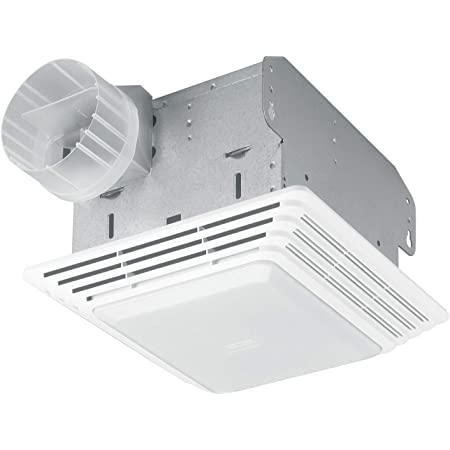 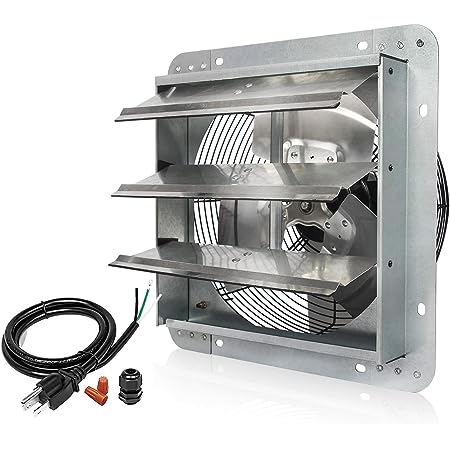 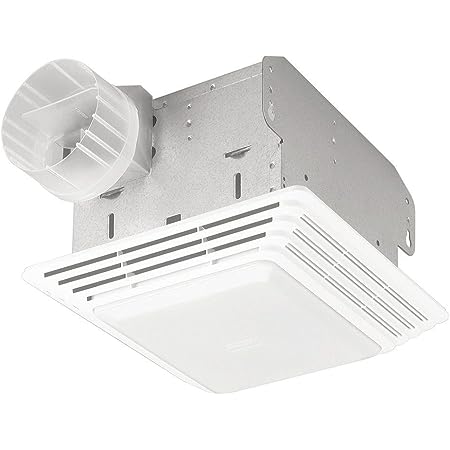 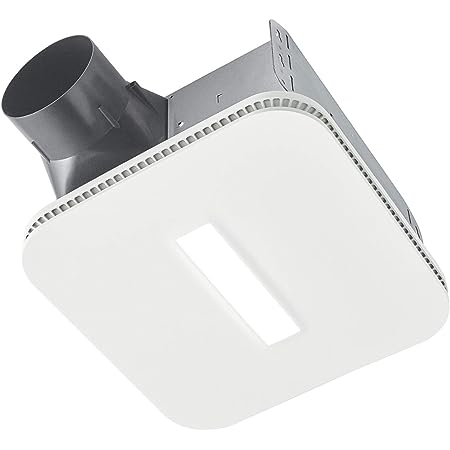 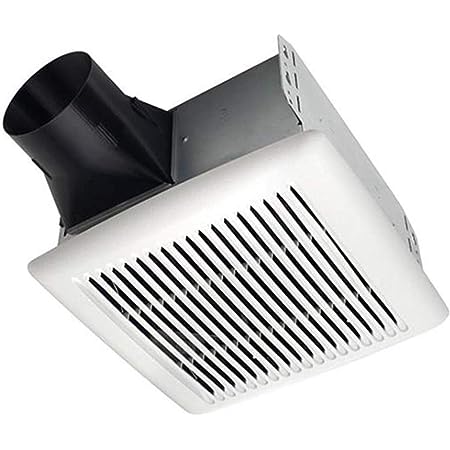 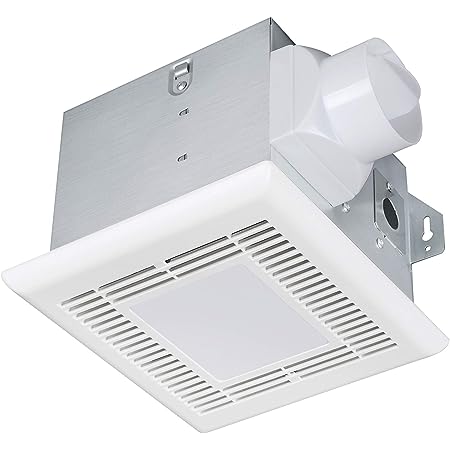