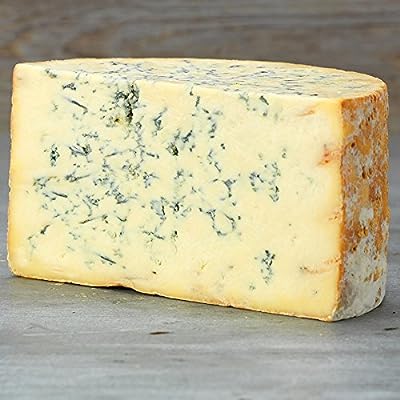 This authentic DOP cheese is from Leicestershire England, from pasteurized cow milk. It is a creamy colored semi-hard cheese with greenish blue veining. Crusty wrinkly rind surrounds the tangy big flavor of this glorious blue cheese. Long known as "The King of Cheeses", Blue Stilton is one of a handful of British cheeses granted the status of a "protected designation origin" (PDO) by the European Commission. Only cheese produced in the three counties of Derbyshire, Leicestershire and Nottinghamshire and made according to a strict code may be called Stilton. Stilton was first made in the early 18th century in the midlands of England in and around the Melton Mowbray area. Stilton takes its name from the village of Stilton (though no Stilton was ever made there) located about 80 miles north of London on the Great North Road. It is here that the coaches traveling from London to Scotland and other northern cities made their first stop for fresh horses and overnight stays. Convenient to Melton Mowbray and the surrounding area, the village became the central market place for the cheese with thousands being sold every week. Thus the blue cheese one would buy in Stilton became known as Stilton cheese. Located in Melton Mowbray, Leicestershire, their multi-award winning creamery produces cheeses, using time honored, traditional methods. The cheeses which include Shropshire Blue are matured individually and are turned and graded by hand, a process that has been passed down through many generations. Set deep in the heart of traditional Stilton cheesemaking country is the small English market town of Melton Mowbray where the Tuxford & Tebbutt Creamery stands externally unchanged in appearance since its construction in the eighteenth century. The Tuxford & Tebbutt brand is a guarantee of prize-winning traditional Blue Stilton which will delight the palate of the most discerning cheese connoisseur.

Best quality in the World. Gave as a gift to someone who buys a lot of Stilton. She said it is the best and the one they used to buy when they lived in London.

Best, best, best Stilton! Arrived perfectly ripe and runny and stinky - the very model of Stilton. Served with oat cakes and honey and, of course, single malt Scotch. I highly recommend this cheese and the seller.

This cheese was advertised as being a 5 lb wheel....it was neither. It was 4 lbs and 1/2 a wheel. Also, there was very little rind if any on the cheese. It was slimy and poor quality. Very little blue veins in cheese, weak flavor. Will never buy from this distributor...

I get my sweet Anglophile husband hunk of good Stilton every year (he gives me the port). This is as good as any he's ever had, and since he spent a lot of time in England, he thinks that's saying something. Hope it's around for his birthday next year!

Best chunk of cheese I've ever purchased. Creamy, delicious, and shipped with excellent packing to protect freshness. Will buy again this next holiday season.