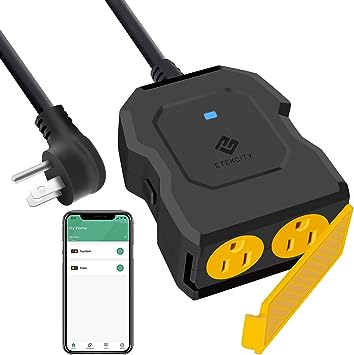 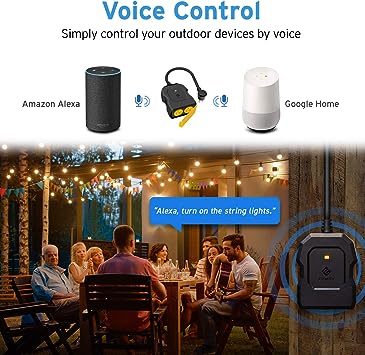 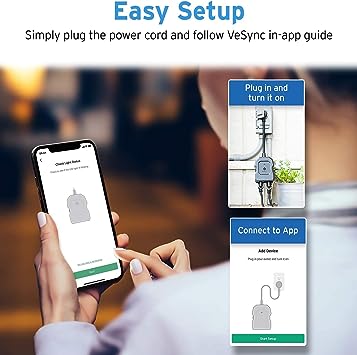 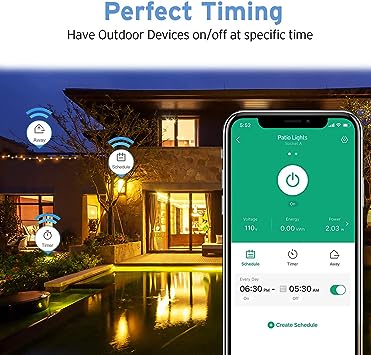 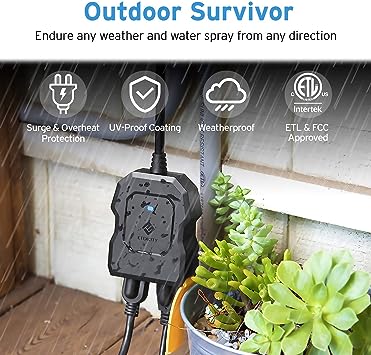 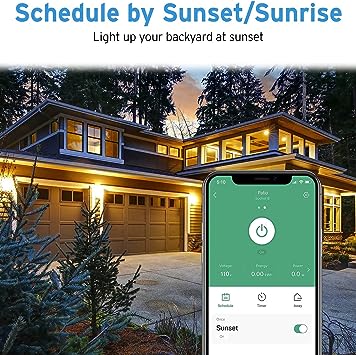 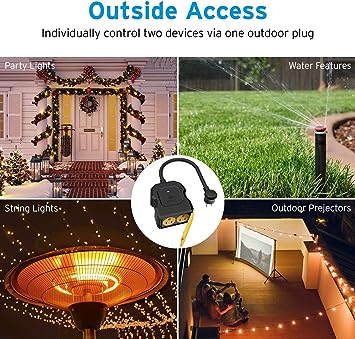 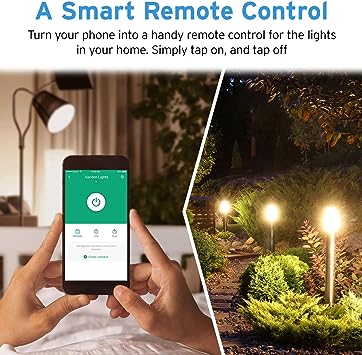 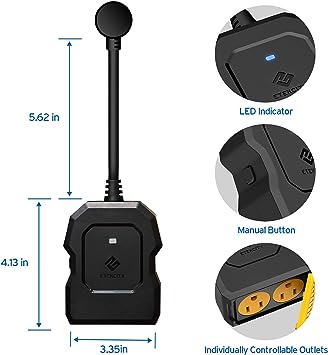 Once you set up your Smart Outdoor Wi-Fi Outlet, you won't have to take another step outside to manage them. With two outlets (which can be programmed and controlled individually), you enjoy twice the smarts in one device. Try plugging seasonal string lights into one socket, and a year-round fountain in the other. Whether you're indoors or out of town, all the power is in your hands. Take control with your phone in the free VeSync app.

I purchased this with my primary goal of being able to monitor the power usage of a pool pump, because I was curious what it was actually costing to run, as well as a plan to set a schedule and monitor power usage of outdoor lighting in the holidays. I haven't tested it for the latter, but it has been in use for about 2 months with the pool pump. The setup was easy, the app is decent, and I haven't had any issues with connectivity. The few times I've used it to toggle the pump and on and off, it has been very quick to trigger the action and without any problems. I appreciate that this has dual outlets which are separately controllable (I'm only using one right now, but when it's holiday light time, I will appreciate the option to control circuits on separate timers.)My main purpose for this was to monitor power usage. In the app, it does indeed show real-time power draw in volts and wattage, and there are limited graphs to see usage over time. However, this is the main source of complaint that I have - The ability to look back at data is very limited. For example, you can toggle between a "weekly", "monthly", and "yearly" view, but within each of those, you can not scroll backwards in time. So if I want to see a weekly graph for last week, that is not an option. Same goes if I want to compare one month to another - There's no way to scroll through months. I do appreciate the option to add in a cost per kWH so it can display usage not just in kWH, but in actual monetary limits, but finding this feature was not intuitive.There is an option to turn an outlet off after a certain dollar value of spend has been reached, but what about an option to simply send a notification if parameters are met, without turning off a device? In my case, I can see that the power usage on my pool pump drops drastically over a 1-2 day span if the filter is getting clogged or dirty, and otherwise remains very stable when it is clean, so an option to send an alert if it falls outside a set range but keep it running would be nice.Overall, I'm pleased with the product. As this is monitored as an "energy monitoring" device, I wish there were more features related to the actual energy monitoring, since it seems to be mainly a smart outlet that happens to record minimal usage data. However, it's providing enough to suit my purpose so I've kept it in use.


UPDATED REVIEW: Not reliable, sending it back!

At first, this WiFi controlled switch was great. It provided easy on/off control, the ability to schedule when it turned on and off, and the ability to control both outlets independently.I connected it to the outlet controlling the heat tape which prevents my pipes from freezing, which is well within the wattage capacity of this switch. It worked wonderfully, turning the heat tape on at night and off the following morning.Then it warmed up a bit, so I cancelled the automatic schedule and left the heat tape off when it wasn't needed.Tonight, temperatures are again going low enough to require the heat tape, so this evening I attempted to turn it on, only to find this WiFi switch was no longer working. The error message I got said it was either powered off or not connected to the network. The outlet it was connected to had power going to it, and the switch was in the same location where it had worked perfectly before, yet the app would no longer control the switch.After crawling under my house and disconnecting the WiFi controlled switch (and re-connecting my heat tape to the outlet the WiFi switch had been plugged into) my heat tape worked as expected. So, why wouldn't this WiFi controlled switch work?My point is, what good is this WiFi switch if it's not reliable. There was nothing wrong with the power supply or the WiFi, it was well within range and in a location where it worked perfectly in the past, it was in a clean dry location protected from wind, rain and snow, but after a couple weeks not being used to turn the circuit on and off it no longer functioned.In short, if you need for this WiFi switch to work reliably, don't buy this one!

There were several "outdoor" smart plugs available. One of the primary reasons I chose this one is that I already own an Etekcity bathroom scale. I figured that I would stick with a brand that worked for me previously. There is an app for Android and Apple that makes setup a breeze. The app has schedules and timers. Each receptacle can be operated independently.Easy setup. Connected to WiFi the moment I plugged it in. It requires your router's password.* I have not experienced (or aware of) any outages in the first couple weeks that I've had it. I no longer use Alexa, so I cannot comment on this aspect of the smart plug.* For added security, I recommend putting IoT devices like this on a separate network than your home's primary WiFi. Search the Googletube if you're interested in this type of configuration.


Great for my application

Works as I wanted it to. Got this for my pool pump which has no on/off switch. It arrived fast and installed easy. Followed instructions and had no problems setting it up. You phone must be connected to your 2.4ghz WiFi for setup, not your 5ghz. After setup you can reconnect to the 5ghz and all works well. Adding to Alexa was easy. Now can just ask "Alexa, turn pool pump on (or off)". I set up a schedule for mine in the app. If I need to do something at the pump, clean skimmer or filter, there is a power button on the side of the plug unit that turns it off/on. This does not affect the app settings, schedule runs as normal with no interruptions as long as you leave it with power on after manual operation. Manual power button only turns power off or on for both outlets. If you had 1 outlet off before using the manual button, you will have to use the app to turn it off after turning on with the button. I like how the app shows power used. Interesting, but not big for me. I have to run the pump. This makes it easier for me rather than plugging and unplugging the pump which was burning the plug from sparks. Safer too. I protected mine from weather with a cover. Working great. Should last. Quality made product with good warranty. I do recommend this item. Many uses. 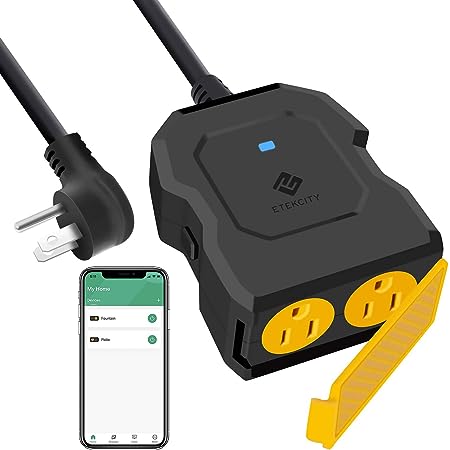 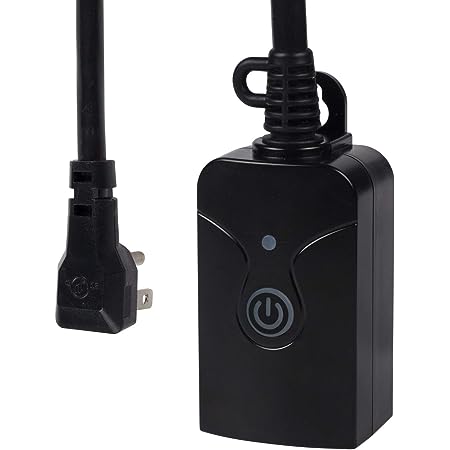 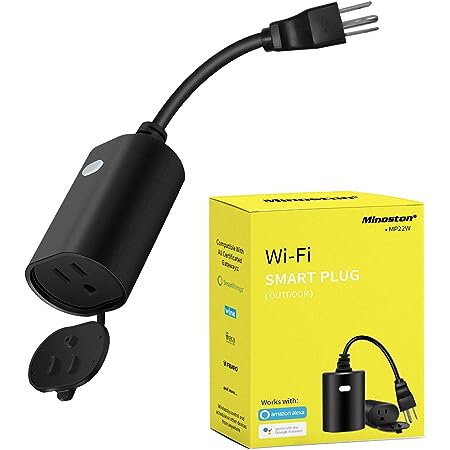 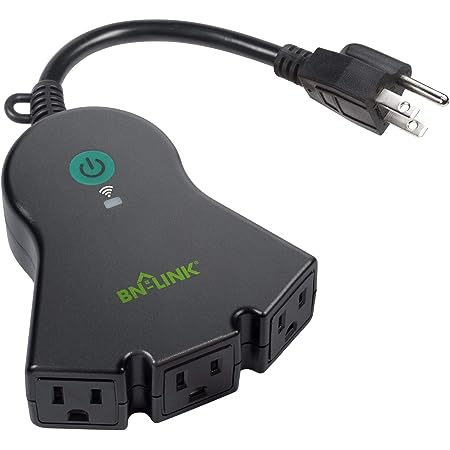 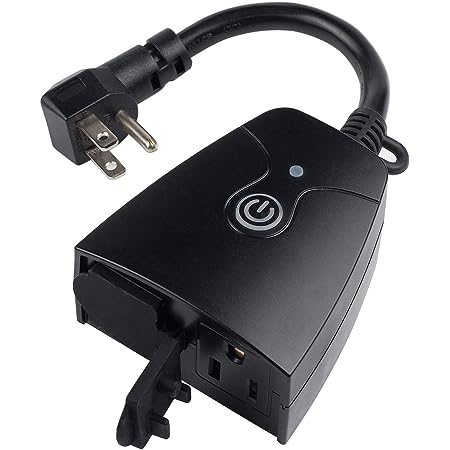 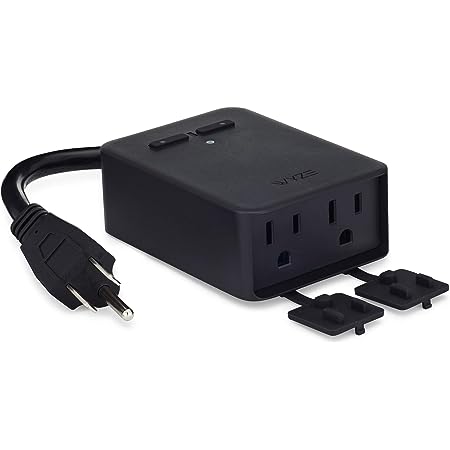